The 1920s was a decade defined by glamour and luxury, and was undeniably the birth of modern culture and interior design. Modernism, Bauhaus and Art Deco styles began to dominate design in all aspects, where geometric shapes, rich colour schemes, luxurious fabrics, and stylised imagery soared in popularity.

These diversified design philosophies added ideas and approaches that achieved interior design styles like never before. Art Deco designers experimented with shapely contours and bold colours. The discovery of Pharaoh Tutankhamun’s Egyptian tomb in 1922 led to a new fascination in exotic worlds, and they combined motifs from ancient civilisations with the prismatic forms of cubist art. Art Deco inspired 1920s interior design that celebrated ornament and conveyed wealth and optimism. Meanwhile, designers trained by the Bauhaus school in Germany worked with clean, simple lines; industrial materials; primary colours; and black and white. They encouraged pieces that were stylishly simple, highly functional and capable of fast and efficient production.

Creative developments and design movements heavily influenced 1920s interior design, and it’s no surprise that some of the era’s most notable trends are popping up inside design-savvy interiors today. Read on to discover more about the bewitching glamour of 1920s interior design.

In all aspects of 1920s interior design, interior walls were often the most understated feature. A bold colour, a coat of varnish, and some accentuating wainscoting, skirting boards, and architraves were applied to add the perfect amount of elegance to each room.

Popular Flooring in the 1920s

Both plain and patterned floors are ideally suited to interior’s aiming to replicate 1920s interior design. Parquet wood flooring (a stunning, geometric mosaic of wood pieces) and patterned rugs are the perfect choice to enliven a space using 1920s interior design styles. For kitchens and bathrooms, checkered floors are a timeless option to add old-world charm and a bit of character to a modern interior. To finish off the look, adorn your walls and add striking decor. A dramatic painting, a glass chandelier, opulent ornaments, and luxurious mirrors are more than enough to create a stunning interior reminiscent of 1920s interior design.

Inspired by the beginning of Hollywood and the silent movie culture, living areas in the 1920s  were sophisticated, with a touch of the exotic. Similarly to fashion and art at the time, the primary trend in 1920s home design was Art Deco and Bauhaus inspired, which was materialized through high-sheen metals, geometric shapes and patterns and tiles.

Bold, geometric furniture and prints featured heavily in 1920s interior design. Living areas were adorned with magnificent designs, large-scale rugs, and oversized mirrors. The setting was elegant, glamorous and luxurious with every aspect of design and style pointing to wealth and status.

Kitchens in the 1920s were the beginning of the modern kitchen. Social changes and new technology saw a move towards spending more time in the kitchen and less time seeking outside help with domestic duties. 1920s style kitchens transformed from being a workshop to a setting for enjoying shared meals and family gatherings, kitchens became increasingly stylised and contemplated. Wainscoting climbed in popularity as an elegant feature that was not only stunning, but protected walls from the constantly moving furniture of dining areas. Mosaic tiles and checkered floors added dimension and character, while bar cabinets were beautiful feature pieces that lit brilliantly to make barware sparkle. 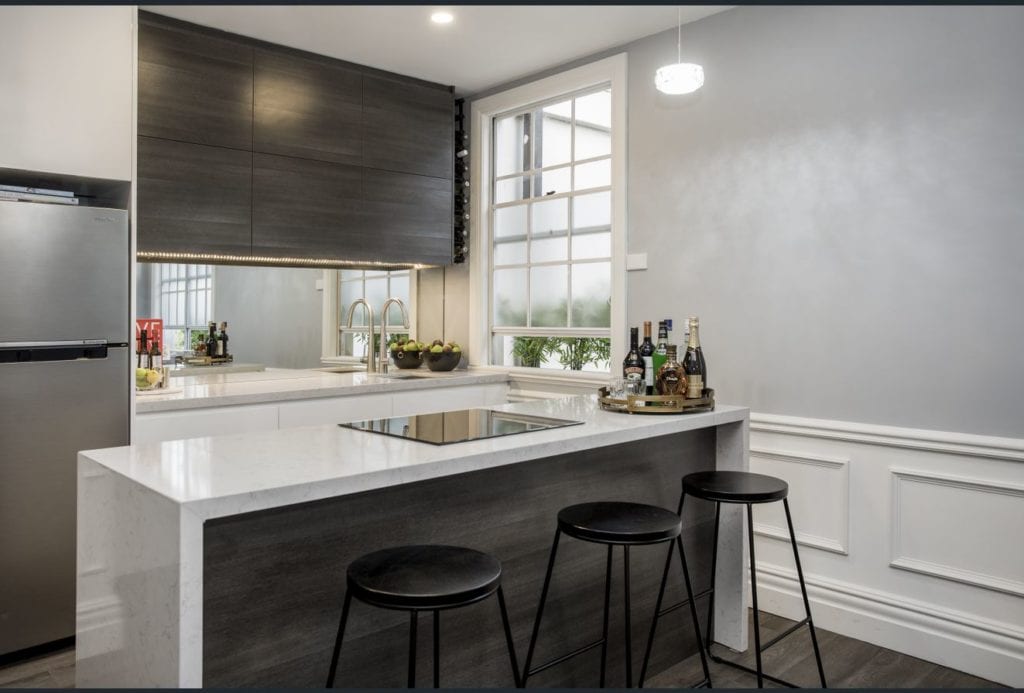 1920s interior design styles can also be seen within the bathroom. Common features included clawfoot tubs, checkered floors, and wainscoting that created a bathroom interior that dazzled. In 1920s style bathrooms, wainscoting added warmth, unified decor, and protected walls from the likelihood of water damage from the freestanding, clawfoot tub.

1920s interior design can be effortlessly achieved in contemporary interiors when keeping these key elements in mind: luxury, glamour, boldness and prosperity. To find out how we can help you achieve a 1920s style design, contact us today!

We aim to turn around quotes within 1 business day!

Get a free quote today

We aim to turn around quotes within 1 business day!

Get a free quote today

How can we help?

Alternatively you can download a PDF copy of the profile guide here.